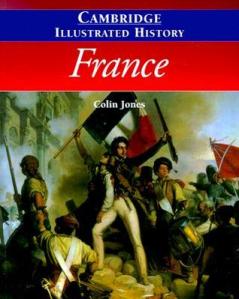 Based on the recommendation of a friend, I found a used copy of this book and ordered it. In my quest to read as much French history as possible before my trip to France, I had read “La Belle France”, another overall survey and wondered if this book would cover the same ground. I was pleased this author takes an entirely different course.

Jones writes more from a social history standpoint in this book. I very much enjoyed the chapters on France before the Romans and Roman Gaul. His chapters on the Franks and the Middle Ages cover a lot more ground than the other histories I’ve read so far. The later chapters covering the Revolution, Enlightenment, World Wars I and II and modern times have less detail but are still erudite and interesting. Occasionally Jones gets a little technical and wandering when discussing certain political situations. One thing I admire in his writing is his attention to the status of women in France throughout the ages.

I can’t say enough about the illustrations. This is what the Cambridge Illustrated Histories are known for. There are numerous maps illustrating different elements of France and its history. The maps clarify countless aspects such as where French dialects were spoken, delineating where Roman law and customary law were practiced, gene pools, agricultural and urban areas, different political boundaries, kingdoms and regions of France, where barbarian tribes invaded, etc.

There are photos of art and architecture, illuminated manuscripts, engravings, paintings, drawings and photographs of key points in French history, all with excellent, well written captions. In every chapter there are also insets with more details about select people and events. Some examples are on Blanche of Castile, the troubadours, the court of the Dukes of Burgundy and so on. All of these images really enhance the text. This is another well-written, informative history of France and I highly recommend it.

One thought on “Book Review: “The Cambridge Illustrated History of France” by Colin Jones”