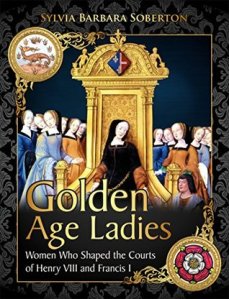 The subtitle of this book is “Women Who Shaped the Courts of Henry VIII and Francis I”. Since I’m interested in women and Tudor and French history, I had to read it! England and France have a significantly entwined history. The book doesn’t disappoint as it has a panoply of women, explaining how their stories are all interrelated.

All the important women of these two courts make an appearance. Soberton gives us a list of characters for France and England along with genealogical tables. Interestingly, she starts out with Louise of Savoy, mother of King Francis I who learned statecraft from the formidable Anne de Beaujeu. Now here is a woman who witnessed so much history. The devoted mother of King Francis and his sister Marguerite, Queen of Navarre, Louise virtually ran the government of France while her son whiled away his time pursuing pleasures such as the hunt, women and warfare. Louise’s shining moment came when the Ladies Peace of Cambrai was negotiated in 1529 between her and her sister-in-law Margaret of Savoy, Regent of the Netherlands. The two women single-handedly brokered peace between France and the Habsburg Empire and Louise secured the release of her grandsons who had been held hostage. A marriage between King Francis and the Holy Roman Emperor’s sister Eleanor was part of the Ladies Peace. Her sad story is also included here.

Along with Louise and her daughter, we meet Queen Anne of Brittany and Claude de Valois and her many daughters, some of whom died and some who became Queen’s themselves, such as Madeleine de Valois. Interwoven with the lives of these French women are those from the court of King Henry VIII of England. Henry’s sister Mary married King Louis XII of France. Although she was queen for a few months, she went on to make a love match with her brother’s best friend, Charles Brandon, Duke of Suffolk.

Soberton gives us a description of the grand summit of The Field of the Cloth of Gold where Queen Catherine of Aragon met Queen Claude. Of course Anne Boleyn plays a significant role in the book as she spent time with Margaret of Savoy at her court in Mechelen and also worked as a lady-in-waiting for Queen Claude. In fact, Soberton gives us an economical description of all of Henry’s wives.

Soberton gives us many descriptions and small glimpses of personal moments in these women’s lives. This is what I liked best about the book. She has obviously done her research. There are photographs and a nice select bibliography if you are interested in more information. I found this book fun to read and enjoyed all the interconnecting stories. I highly recommend it.