This biography of the Stuart Restoration King Charles II was recommended by the author of another book I was reading for research.  He said it was the best biography on this king that he had found.  That was enough of an endorsement for me.

Mr. Hutton was a reader in History at the University of Bristol at the time of publication (1989).  This was ten years after Lady Antonia Fraser’s magnificent biography of Charles II was published.  Hutton’s book is completely different from Fraser’s although he gives her great praise for her work.  The difference is, Hutton relies entirely on primary sources to tell the story consisting mostly of letters.

This volume is an in-depth examination of the politics of the reign of Charles II, including Scotland and Wales.  While he covers the life of the king, it explains more about the men who surrounded him and helped him rule his three kingdoms.  If you are looking for personal details, Fraser’s book would be more relevant.  Hutton is looking for who surrounded the king, who gave him advice, and how did Charles make decisions.  The lives of the councilors can sometimes be as fascinating as that of the king.

This is not an easy read.  At times it was a little dry and some of the politics could be confusing.  It helps to have a working knowledge and background on the era.  But I found Hutton’s insight into the personalities of the king, queen, Charles’ mistresses and the men who surrounded him to be very absorbing.

The final chapter supplies the author’s conclusions upon the virtues, vices and achievements of Charles II.  He states he realized early on he was dealing with a legendary figure.  In constructing his view of Charles, he tried to use only what was said about him by his contemporaries and weed out the material that was apocryphal.  Hutton has done a remarkable job.  I now have an improved understanding of this king and his reign. 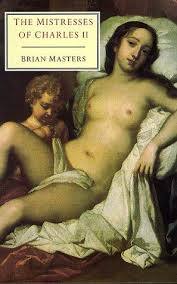 This book was published in 1979.  I had never heard of the author but his many works include books on a variety of topics including the aristocracy, French history, biography, positive thinking and serial killers.  The subject of this volume is four of the mistresses of King Charles II.

Charles was one of the most popular monarchs ever to reign in England and also one of the most amorous.  Masters says there is no way of knowing exactly how mistresses Charles had but he believes there were fifteen that were documented and known.  He says the four women covered in this volume were each in their own way important in the King’s life.  All the women had progeny by the king that left their mark on the aristocracy of Britain.

Lucy Walter was Charles’ lover in his adolescence during his early years in exile after the execution of his father King Charles I.  Their liaison didn’t last long but it produced a son named James whom his father elevated to the title of Duke of Monmouth.  Monmouth was the founder of the Dukedom of Buccleuch through his marriage to Anne Scott, daughter of the 2nd Earl of Buccleuch.  Charles’ most infamous mistress, Barbara Villiers was a fiery and avaricious beauty.  Charles elevated her to the title of Duchess of Cleveland and her illegitimate son by the king, became the first Duke of Grafton,

Charles’ final mistress was a Breton, Louise de Kéroualle.  She was introduced into the English court by King Louis XIV of France to act as a spy and further French interests.  She became Charles’ maîtresse-en-titre and was queen in all but name.  Louise became the Duchess of Portsmouth and her illegitimate son was the Duke of Richmond.  Charles’ most popular mistress was Nell Gwyn.  She was an actress who was witty, gay, fun and honest.  She was the Protestant mistress and her son became the first Duke of St. Albans.  That’s a portrait of her and her son on the book cover.

Other mistresses covered are Frances Stuart, Hortense Mancini, Duchesse Marzarin, and another actress Moll Davis.  I have to say this book is so well-written and such a fun read, I didn’t really want it to end.  Masters sticks to the subject matter and doesn’t get sidetracked in any way.  The lives of these women are fascinating.  I highly recommend this book.