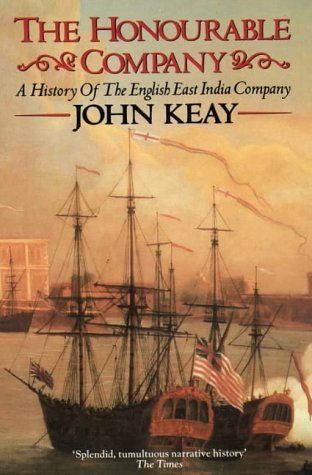 This book was recommended to me by a history friend who specializes in eighteenth century English history.  I was looking for an all-encompassing history of the East India Company and this book fits the bill.  Keay gives a very detailed history of the earliest incarnation of the East India Company starting in the Tudor era and continuing into the Stuart reign of kings down to its liquidation in the nineteenth century.  Each ship that sets out in the early years is followed around Africa into the Indian Ocean and into Asia.

The stories told are fascinating.  Keay tells us of the brave men who went on these trips, explored the coastlines, set up factories, and bargained with native chieftains and nabobs from Japan to India to China.  Some of these outposts worked well and survived and some of the men were scandalously murdered.  Many succumbed to fever and disease.  There were pirates and private traders.  Cargoes were stolen or sunk or arrived in port in England with no problems.

The inner workings of the company are covered here with the raising of subscriptions initially and then stock being issued later.  Sometimes the profits were outstanding but many times money was lost.  The East India Company at one point was abolished and then reincarnated, causing conflict in the outlying trade posts around the world.  Eventually the company raised its own army to protect the factories.  The Company became a government unto itself, creating its own trading agreements and fighting wars.

The East India Company has a vast and varied history and this book covers it all.  Some of the writing is a little dry but there are plenty of exciting stories to make up for it.  The personalities of the men involved were quite interesting.  I would recommend this book if you are seeking an overall history of this global corporation.