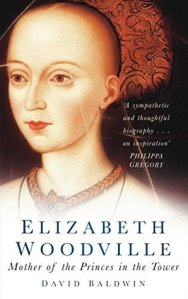 This is a very concise, no nonsense, sympathetic and non-biased biography of Elizabeth Woodville. She was the wife of King Edward IV of England and mother of the two princes who disappeared from the Tower of London during the Wars of the Roses and also the mother of Elizabeth of York who became Queen of England when she married the victor of the Battle of Bosworth, Henry Tudor. This made her a matriarch of the Tudor dynasty of Kings of England.

I like the way Baldwin breaks down Elizabeth’s life into its various phases. There is little information on her early life but it was interesting to see how Elizabeth was sent to the Grey family to be educated and how she married a son of the family. Elizabeth was widowed after giving birth to two sons and then she met the king. The way Baldwin tells the story, Elizabeth and King Edward barely knew each other and their secret marriage happened very quickly. This really stands out from reading this biography. The marriage appears to have been a spur of the moment decision on Edward’s part and could possibly have been a great surprise to Elizabeth.

The early marriage was going very well but then King Edward was deposed for a short time. Because Elizabeth was English, she had no outside assistance and was forced to take sanctuary in Westminster Abbey with her children while her husband was overseas. While there she gave birth to her first surviving son by the King. This must have been a very anxious time for her.

Edward did regain his throne and there was a period of peace in the kingdom until the King’s unexpected death. Elizabeth had a hard time under the reign of Richard III. It was during this time that her sons disappeared. Eventually, her eldest daughter married Henry Tudor and a new dynasty was founded. Elizabeth was forced into retirement at Bermondsey Abbey and lived in poverty the last five years of her life.

This book explains it all. Baldwin addresses all the historical mysteries of Elizabeth’s life, giving all the theories and angles. There are genealogical tables, a section of pictures, excellent notes to the text and a select bibliography. I would recommend this book for those who don’t know Elizabeth’s life and for scholars.

It is very unfortunate that little historical evidence or records exist regarding the life of Anne Neville, daughter of the Earl of Warwick and wife of Edward of Westminster and finally King Richard III. There doesn’t seem to be enough to fill a two hundred page biography but Amy License delivers with this book. As I have mentioned before I try to avoid the Wars of the Roses but this book piqued my interest because it’s about a medieval noblewoman who became Queen of England.

This book gives us the scant detail we know of Anne and fleshes it out with interesting historical details. There is a lot of information about the Earl of Warwick, Anne’s father, known to history as “The Kingmaker”, because details of his life give us insight into the home Anne grew up in. Warwick was Captain of Calais so Anne spent a few years of her childhood in France. Warwick’s machinations in bringing the Yorkist Edward, Earl of March to the throne and his about face in supporting Margaret of Anjou’s attempt to bring her husband Henry VI back to the throne are described. Licence gives us a great lesson in these events in easy to understand narrative. This is important to Anne’s story because it explains how she came to marry Edward of Westminster, the son of Margaret of Anjou and King Henry VI.

It is also important to Anne’s story because her father was killed in battle and eventually her husband Edward was killed too, leaving her a widow in the care of her sister Isabel and her husband the mercurial Duke of Clarence, brother of Anne’s future husband, Richard Duke of Gloucester. It is interesting to note that no one knows how the marriage of Anne and Richard originated. There was opposition to the alliance and it is a mystery who first suggested it. But marry they did with no expectation they would be king and queen.

The early years of Anne’s marriage and the birth of her son Edward of Middleham are recounted. Licence tells us of the castles the couple lived in and how they acquired more property and renovated some of them, along with the religious institutions they patronized. Using contemporary sources regarding how medieval women ran their households and aided their husband’s, we can get an idea of Anne’s daily life. All of this was to change with the sudden death of Richard’s brother, King Edward IV in the spring of 1483.

Richard was appointed Protector and regent for Edward’s young son, King Edward V. In a mysterious turn of events, Edward V and his brother and sisters were declared illegitimate and the Council asked Richard to be king. King Edward V and his brother Richard, Duke of York disappeared in the Tower of London sometime during the summer of 1483. Richard and Anne were crowned king and queen and then circumstances seem to have unraveled over the next two years.

This book is enjoyable, easy to read and fascinating. This time period of the Wars of the Roses brings up way more questions than answers based on the existing evidence. Licence poses all these questions and leaves it up to the reader to decide what they think really happened.