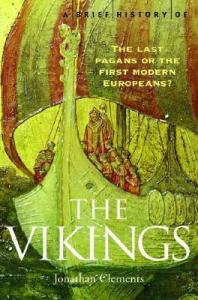 Due to testing my family DNA, I discovered my paternal ancestry is Nordic Viking. To go along with this, the History Channel began airing a series called “Vikings” which I have thoroughly enjoyed, by the way! This made me want to know more so I began by reading “A Brief History of the Vikings: The Last Pagans or the First Modern Europeans?” by Jonathan Clements.

While this is not a definitive history of the Vikings, it’s a great introduction. Clements writes with an easy style, injecting subtle humor into the stories. He begins with a short rundown of the Viking people before the great Viking Age with a chapter on the myths and legends of Scandinavia. This includes an explanation of what is known of their religious practices and those of the people in the surrounding geographic area. He then moves on to the late eighth century when some of the raids began on England, Ireland, the Highlands of Scotland and other islands. Clements also tells us about the history of Iceland and the colonies there.

There are several reasons given for the diaspora of the Scandinavian peoples during the Viking Age. Most importantly has to be trade. The Vikings were in search of trade and especially silver. This led them to the Middle East where they traded with the Muslims for vast amounts of silver. But after the mines stopped producing the metal, they had other motivations for sailing to other locales. Clements points out there were family feuds among the men that drove them to conquer others. The Vikings also went in search of more land to farm and raise livestock.

They sailed their well-constructed ships to many geographical places: England, Scotland, Ireland, northern France, Iceland, the Faroe Islands, Greenland and even North America. My favorite stories are of those who came to North America and about Hrolf the Walker, also known as Rolf or Rollo, who founded the Normandy dukedom in France and was an ancestor of William the Conqueror. Being American, I was always taught that Christopher Columbus was the first person to “discover” America. Clements gives a nice rundown of the many explorers and colonizers who viewed or touched on the shores of North America. Some stayed for short periods of time and some took lumber and brought it back to Greenland and Scandinavia. And of course they encountered the “Skraelings”, or Native Americans, much to their discomfort. This was my favorite part of the book.

The pinnacle of the Viking Age according to Clements was the life of Harald Hardada (the Ruthless). He had many adventures. Whether they were true or fanciful exaggerations doesn’t really matter because it still makes for a good story. This book is a great foundation for those who want to know more about the Vikings. There are some nice photos in the book and a great appendix. There are lists of Rulers During the Viking Age along with family trees and maps. And of course, there is an excellent bibliography for those who are interesting in exploring more. I recommend this book and will keep it in my library for further reference.