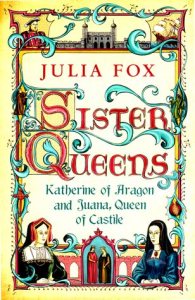 In the never-ending quest to discover if Juana of Castile was really mad or not, I picked up a copy of this book to read. Having read plenty of biographies of Katherine of Aragon, I wasn’t as interested in this part of the story but Fox does present Katherine in a slightly different light which is always refreshing. But I have to confess, as I was reading the beginning of this book I became a little annoyed. It’s not really a serious biography of these two women at all.

My recent reading has been of more thoughtful biographies and analyses of history such as Bethany Aram’s “Juana the Mad” so Fox’s book seemed on the simplistic side. It reads more like historical fiction. However, that being said, the deeper I got into the book, the better I liked it. There are some great descriptions of certain events in Tudor history with some wonderful detail, essentially bringing the events to life. The recounting of the death of Katherine is really moving.

There could have been a lot more about Juana in this book but I understand why there isn’t. Juana’s time in public life was short having spent the majority of her later years in custody. And we don’t really know that much about how she actually felt or what is accurate according to the chroniclers who wrote according to their own personal agendas. I think Fox is more than fair to Juana in being somewhat neutral and not describing her as a raging lunatic.

After saying all this, I’m still going to recommend this book because Katherine and Juana are still captivating historical characters. Tudor history lovers will find it interesting and those who want to learn a little more about the sisters’ upbringing in Spain and basic facts about Juana will enjoy it.