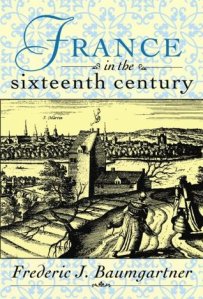 I’ve been reading a lot of French history since the first of the year. The selections included a general survey, a secret history of Paris, medieval Paris and the Norman Conquest among others. But I have to say, sixteenth century France really intrigues me the most for several reasons. The characters of this period are really compelling and they are contemporaries of Tudor England, another of my favorite eras.

The chapters on the clergy cover the challenges created by the spread of Calvinism in France and the Catholic response. For the nobility, he examines the developments in the military and under the commoner chapters, he discusses economics in the cities and the countryside. There is extensive information about the judicial system in France. He also gives an overview of cultural and intellectual changes during the century. This book really covers a great deal of social history.

Baumgartner is a professor of history at Virginia Polytechnic Institute and State University. He states in the introduction that this book is intended for upper level undergraduate and graduate students and advanced scholars looking for detailed information about the era. While the book is intended for academics, I really found it to be a fun read. There were a few sections that were dry and uninteresting but for the most part it was completely absorbing. Information I enjoyed included how revenues were collected, how food was distributed, how the judicial system worked, the lives of the nobles and the clergy and the monarchs, and the rise of Calvinism in France. Perhaps the best section for me was a succinct description of the Wars of Religion. I always wondered why there were so many petty nobles in France. I learned from this book that people could buy their way into the nobility!

The sections on intellectual and cultural pursuits were fascinating too. Baumgartner convincingly includes a lot of information on women during this era which I find refreshing. There are photos, maps and genealogical tables in the book as well as a glossary of terms which I will definitely refer to again. This book really delivers on its topic and I highly recommend it.