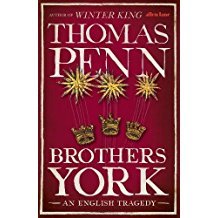 Thomas Penn’s “The Brothers York:  An English Tragedy” is chock full of revelations.  His book on King Henry VII “The Winter King”details Henry’s creative accounting and this book does the same with King Edward IV.  Penn breaks down the inventive financing Edward IV engaged in to raise funds for the government and for himself.  Much of the money garnered by these methods went straight to the king’s chamber rather than the Exchequer.  The raising of bonds from nobles in exchange for good behavior was started during Edward’s reign and Henry VII just continued the practice.

Penn explains over and over again how Edward IV manipulated the inheritance laws to confiscate property from the nobility and in turn, give it to his brothers and most loyal followers.  This practice obviously did not endear Edward IV to the nobility.  These transactions caused resentment and anger toward the king, perhaps more so than his favoritism of the Woodville family.  And Penn, rightfully so, emphasizes that any gains made by the Woodville family only occurred at Edward’s pleasure.

The manipulation of the inheritance laws greatly concerned King Edward’s brother George, Duke of Clarence.  Before Edward married Elizabeth Woodville and had children, George was the king’s heir.  This went to his head, giving him a sense of entitlement.  George was aggrieved and angry with Edward for giving and taking away property and for the loss of his position as heir to the throne.  Foolishly, George rebelled against Edward, and we all know how this ended.

But to me, there is one startling revelation.  Penn really only hints at this and never comes right out and says it point blank.  Richard III was an alcoholic.  He mentions Richard was seriously drinking large quantities of wine after he became king.  This was so intriguing to me.  In his footnotes, he cites an article in an academic journal titled:  “Multi-isotope analysis demonstrates significant lifestyle changes in King Richard III” written by four researchers from the British Geological Survey and from the University of Leicester.

They examined the bones of Richard III and concluded he was eating a diet of rich food and significantly increased his wine consumption during his years as king.  The scientific evidence suggests Richard was under great stress and drinking heavily.  In his case, it was easy to become king but not so easy to execute royal duties and remain king.  This goes a long way in explaining some of Richard’s behavior and decisions.

All the little intricacies and relationships between the three brothers and the courtiers and nobles of the court are examined intensely by Penn with extraordinary perception and discernment.  To me, studying the Wars of the Roses always made me uncomfortable because none of it made complete sense.  Penn’s insight into the character and machinations of Edward IV, George, Duke of Clarence and Richard III has really gone a long way toward explaining this decades long conflict.  It all becomes crystal clear and is pretty fascinating.  This is one of the best books I’ve read in the last ten years.  I highly recommend it.