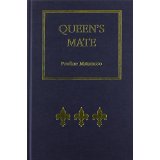 The full title of this book is “Queen’s Mate: Three women of power in France on the eve of the Renaissance”. I have to confess I almost didn’t buy this book. My research in to Anne of France, the unofficial regent of her brother King Charles VIII led me to this title. There is no full biography of her in English, however every source I did have for her mentioned this book. The other two women Matarasso writes about are Anne of Brittany and Louise of Savoy.

This work intrigued me but in looking for a copy of the book, it appeared it was out of print and the only copies available were used and very expensive. But I came into possession of some gift cards for Barnes and Noble and decided to use them to purchase the book. Boy am I glad I did! This is one of the best women’s biographies I’ve read in a long time. The book is so rich in detail on the lives of Anne of France and Anne of Brittany. Matarasso obviously did her research.

The first quarter of the book is dedicated to Anne of France. There is a lot of good detail about her reign as regent, especially about the “Mad War” and the War of the Breton Succession. Matarasso explains how Anne of France skillfully and diplomatically managed these conflicts which ended with the marriage of Anne of Brittany to King Charles VIII. Anne of France then retired from public life but still kept her hand in the government of the kingdom as well as her own duchy of Bourbon. I found a lot of good material here to write an article about her.

The majority of the book is about Anne of Brittany. I love all the details about Anne of Brittany’s chaotic childhood and her three marriages. Matarasso’s description of Anne’s two husband’s exploits in trying to conquer Italy are great. There is a great description of the scene of a visit to the French court by Juana of Castile and her husband Philip of Burgundy. Matarasso tells us about the castles Anne lived in, about her many pregnancies and all of her virtues as well as her faults.

There is really only a passing mention of Louise of Savoy here. Matarasso gives us some detail about her childhood. She was brought up under the guardianship of Anne of France and married a minor nobleman. The book ends with the accession of her son to the throne of France as King Francis I and Louise had a huge role in her son’s government so that piece is missing from this book. Matarasso explains there really is no complete biography of Louise. That may have changed since this book was written in 2001 but I know of no biography of her in English.  (I have since found a biography of her written by Dorothy Moulton Mayer.  See the review here.)

Since I received my copy of the book I found out it was published by Ashgate Publishing Company and the book is available from them on their website, although it is still expensive. But if you have an interest in these women and the period and you have the funds, I strongly recommend it. The writing is breezy, fun and keeps your interest. I couldn’t put it down.

One thought on “Book Review: “Queen’s Mate” by Pauline Matarasso”