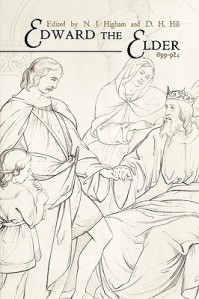 There is a real dearth of primary sources for historians to work with regarding the reign of the Anglo-Saxon King Edward the Elder, first son of King Alfred the Great. This is a real shame because Edward did much to build the English state during his twenty-four year reign. He led many successful campaigns against the Vikings and had control over much of southern and middle of England. His influence also touched Wales and the north. He had three wives, a large family and prickly relations with the church. This book is an attempt to shed some light on the reign of this important and critical ruler.

This volume was published in 2001 and is a compendium of papers which were presented at a conference at the University of Manchester, organized by the Manchester Center for Anglo-Saxon Studies in 1999 in recognition of the eleventh centenary of Edward the Elders accession to the throne of Wessex upon his father’s death. A variety of scholars have written individual chapters using such diverse sources as coins and textiles, literature and archaeology. If the reader is familiar with Anglo-Saxon studies, some of these names will be very recognizable.

While some of the papers contained in this volume are well written and readable, some of them are not. A number of the subjects are interesting and some are esoteric and pedantic. It would depend on the reader’s preference and purpose in reading the book as to whether the chapters are useful or not. Regardless, the book brings awareness to many aspects of Edward’s reign. Personally, I enjoyed the introduction by Nick Higham on Edward’s reputation and the papers on Edward’s relationship with the church. Barbara Yorke’s chapter on Edward as Atheling was most interesting. She went into how his father worked to make him the candidate to succeed him and to protect Edward’s position. Simon Keynes has a great chapter which serves as a survey of Edward’s reign. There are specialty chapters on the coinage of Edward, how the Irish viewed West Saxon dynastic practices, the Danelaw, the shiring of Mercia, York, and an interesting chapter on the embroideries from the tomb of St. Cuthbert in Durham Cathedral. It is believed that Edward’s second wife Aelflaed commissioned these embroideries.

There are other interesting chapters here on Edward’s large family, his own marriages and how he married his daughters to men on the continent and a whole chapter on his niece Aelfwynn. Aelfwynn was the daughter of Edward’s elder sister Aethelflaed, the Lady of Mercia. When Aethelflaed died, Edward exiled Aelfwynn and basically took over the kingdom of Mercia. I found these chapters on the family relations the most interesting and in sync with my own personal research. Whether the reader of this volume is an advanced historian, undergraduate or a general reader, there is something of interest for everyone. This book will serve as the closest to a biography as we can expect until someone writes a definitive work on Edward.