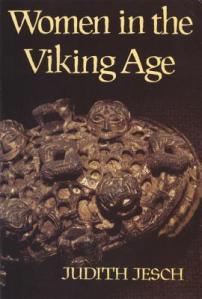 In a continuation of my personal study of the history of the Vikings, I picked up “Women in the Viking Age” by Judith Jesch. Dr. Jesch is Reader in Viking Studies at the University of Nottingham, England and the author of numerous studies of the Viking Age and Old Norse literature. This book is a very thorough examination of the role of women in various contexts.

Jesch begins with the evidence of archaeology, especially what’s found in graves. Women’s graves can be identified by the objects found in them such as jewelry and bits of clothing, domestic utensils such as implements used in weaving cloth, combs, needles, knives, shears, some cooking equipment and agricultural implements such as sickles. There have been many studies of graves and grave goods and Jesch cites these in her analysis. Her next chapter explains how women appear in runic inscriptions. Many women were commissioners of runes stones and women are mentioned in the inscriptions. Jesch mentions all the stones involving women commemorating the dead in Denmark, Sweden, Norway and the Isle of Man.

Jesch talks about female colonists and the evidence of place names, especially in England and Iceland. She relates all the references of Viking women in foreign sources including written sources by foreigners who visited Scandinavia. She gives a list of these sources which include Arabic texts. In addition she mentions the women who were written about in sources such as the “Anglo-Saxon Chronicle”, “Russian primary chronicle”, different Frankish annals, and the “Annals of Ulster” and “Vita Findani” of Ireland.

The next section of the chapter goes into women’s roles in various Norse myths and legends. This was by far my favorite part of the book. First Jesch recounts the sources for the myths and legends, the “Poetic Edda” and the “Prose Edda” which were written down in the thirteenth century in Iceland. Here she talks about the goddesses in the Norse pantheon, women as objects of desire, warrior women and gives examples of women in Eddic poetry.

The next section deals with women in skaldic poetry. These are poems invented by Scandinavian and Icelandic court poets for kings and usually have descriptive historical content, praise for kings, and tales of battles and deeds of the king’s career, epitaphs and genealogies. As Jesch points out there are many women in these poems. These women are shown cheering on their men, listening to their tales of battles and exploration, women’s suffering and even romance. Jesch explains the meter and wording of the poems which have strict syllabic rules and she gives many illustrations in Old Norse with English translations. She tells us there may have been some women skalds and about the audience for these poems.

The books ends with a summary of the types of Viking women encountered throughout history and how the introduction of Christianity affected the lives of some women. The book contains many illustrations depicting women in runic stones, picture-stones and also pictures of grave goods found in female graves. There is an extensive bibliography to facilitate further study. This is an authoritative book on the subject of women in the Viking Age and I highly recommend it.