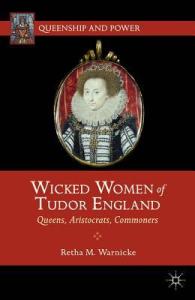 Such an intriguing title for a book! This is one of a series of eighteen books under the heading “Queenship and Power” published by Palgrave Macmillan and edited by professionals from all over the world. Retha M. Warnicke is a professor of History in the School of Historical, Philosophical, and Religious Studies at Arizona State University. She has written numerous books on Tudor England.

I was looking for a biography of Anne Stanhope, the wife of Edward Seymour, Duke of Somerset and Lord Protector during the reign of King Edward VI and this book came up in a search. There is a chapter about her and she has a reputation for being somewhat of a shrew and for having some kind of feud with Queen Katherine Parr. She was accused of trying to take precedence over the Queen Dowager at social functions and of taking Parr’s jewelry. It was even rumored she had caused her husband to commit fratricide.

I’m not sure exactly what I was expecting from this book. It is actually an academic historical argument about how six women of the Tudor era gained wicked reputations. Warnicke takes each woman and reviews the historical records, literature and chronicles where they are described as “wicked”. She follows this with the known historical facts about their lives. In some cases she describes her own personal theories about the women.

Two of the chapters deal with Anne Boleyn and Katherine Howard, the two queens of King Henry VIII who were executed. I was a little frustrated with Warnicke’s arguments about them. In the case of Anne Boleyn, her theory is that she was considered wicked and executed because she miscarried a deformed fetus. Really? By the time Anne was arrested, there had been plenty of preparation and political machinations for charges against her. And Henry’s eye had already strayed to Jane Seymour.

For Katherine Howard, Warnicke argues she was the victim of sexual predators. I don’t think this is in dispute. She also argues that Katherine Howard denied she had sexual relations with Thomas Culpeper. Even if she didn’t, just the fact that she met with him surreptitiously was a mistake. I’m thinking if there was even the semblance of impropriety she was in trouble. If she became pregnant, there would be questions concerning the legitimacy of the child to inherit the throne. Maybe she wasn’t wicked but her behavior certainly didn’t help her own cause.

In the chapter on Anne Stanhope, Warnicke presents the evidence that yes, there may have been a personal controversy between her and Katherine Parr but this isn’t what resulted in Thomas Seymour’s execution. She argues that the Duchess’ inability to deliver favors for those who sought help from her husband caused anger and resentment against her, creating a wicked reputation. Certainly the historical facts about the rest of her life create the impression that she was in good standing with society and maintained a good reputation with her contemporaries.

The other chapters tell us about Lettice Knollys, the second wife of Queen Elizabeth I’s favorite Robert Dudley, Earl of Leicester and the two wives of Sir Thomas More. It is remarkable that Lettice’s wicked reputation is based on a letter confirming the marriage ceremony between her and Leicester that mentions she wore a loose fitting gown. This has been taken to mean she had premarital sex and was pregnant at the time of her marriage. Loose fitting gowns were commonplace at that time. The obstreperous reputation of the two wives of Sir Thomas is based on rather flimsy interpretations on the writings of More’s great friend the humanist Desiderius Erasmus and others. These two chapters were very interesting.

Some of the biographical information and her arguments are thought-provoking. But this is a work of academic argument, not a breezy read. The writing can be confusing so it requires patience and attention and some knowledge of the women and the era. I’m going to recommend this book with these caveats.